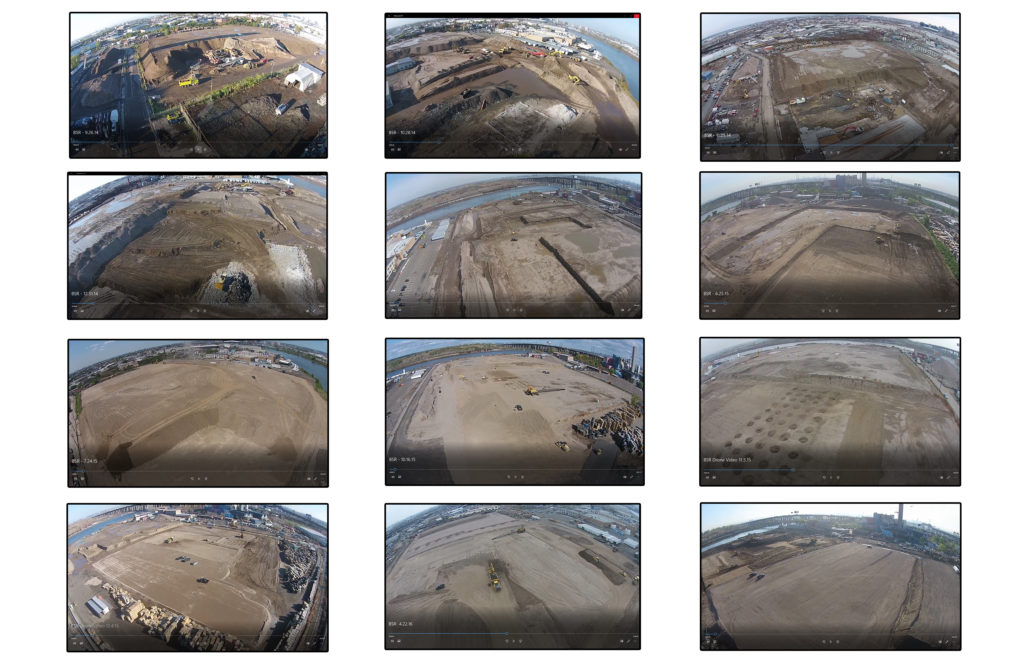 Time lapse of work performed on the Blanchard Street Redevelopment over a 4 year period.

Since Impact Environmental’s (Impact) involvement in 2013, the Blanchard Street Redevelopment project has demanded an enormous amount of effort, fortitude, problem solving and cooperation between and behalf of Impact team, the Morris Companies, and the City of Newark. Impact’s work has now concluded with the completion of the earthen cap that stands strong underneath a 706,083 sqft building which will be the future home for Fabuwood Cabinetry Corp. The origins of the project site are 32 acres previously comprised of 15 separate parcels of land and now vacated portions of Blanchard Street. Those parcels included, among others, the former Fairmount Chemical works, a former methadone clinic, a former Newark Housing Authority property that had been subject to past tenant abuses and had been deemed illegal landfill, and an abandoned unsafe four-story building that was part of the former Seaboard Chemical and Miner Edgar Companies.

The Fairmont Chemical works filed bankruptcy in 2003 and abandoned the structures and all its many dangerous chemicals. The NJDEP requested that the City of Newark take immediate action to clean up and secure the property and its chemicals in that it was a threat to the health and safety of the surrounding community. The Morris Companies took immediate action to safely and legally remove the chemicals and demolish the remaining structures. In 2006, the Morris Companies were named the Redeveloper of the property. Since that time, the Morris Companies purchased, aggregates and acquired the additional parcels around the chemical works to complete the boundaries of the Blanchard Street Redevelopment project Together with Impact, the properties were investigated and remediated under the NJDEP SRP.

Part of the remediation of the property required building demolition and placement of an earthen cap to raise grade away from existing residual contamination in the site wide soils. The remediation required Impact to remove over 1,300 tons of hazardous chromium (D007) soil. Impact was also able to produce over 100,000 tons of CMC quality fill material recycled from the demolition and removal of material from the site. As part of the site work and placement of the earthen cap and in accordance with FEMA flood elevations and NJDEP flood hazard requirements Impact imported over 600,000 tons of alternate fill and clean fill.
Impact is proud to say it met and surpassed the many major challenges of this project including hot-spot removal, importation of appropriate fill necessary to raise the property above the residual contaminants without impacting the Passaic River; processing the fill to meet structural specification; placement and compaction of processed fill through surcharging; and, survey work to meet final construction grades. This huge accomplishment pushes the Impact family of companies to take on larger and more complicated projects across the country as we become proven Brownfield developers.